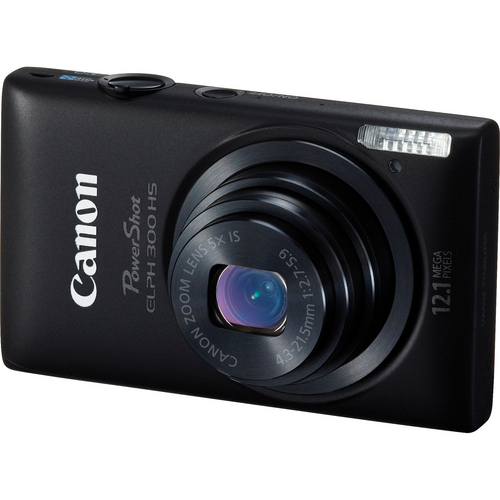 You might be surprised when you learn just how much is packed into such a slim point-and-shoot. Let your imagination run wild, and let Canon’s HS SYSTEM, a 24mm lens, 5x Optical Zoom, and 12.1 Megapixels help you snap great photos everywhere.

Some of the Technical Details

The ELPH 300 HS is less than an inch deep and weighs less than 5 ounces.

At less than an inch deep and weighing just under five ounces, the PowerShot 300 HS will fit right in your pocket, but it packs plenty of power into its sleek point-and-shoot body. A 24mm ultra wide-angle lens with a powerful 5x optical zoom gives you the versatility to shoot in any number of situations, and the optical image stabilizer keeps things from getting too shaky when you’re zoomed in tight. Whether you’re out partying or just walking around town, you don’t need to sacrifice style for power–the PowerShot ELPH 300 HS has got you covered for capturing great photos effortlessly.

The PowerShot 300 HS delivers good images and reliable performance in a variety of shooting conditions.

Most importantly, it has a different sensor, a 12.1 megapixel CMOS sensor compared to the 14.1 megapixel CCD sensor of the earlier version. The new sensor is designed to give the camera enhanced low light image quality and faster speed. The new camera also has a lens with a wider angle of view, 24mm compared to 28mm, and more optical zoom, 5x compared to 4x.

The ELPH 300 HS has a higher quality video mode, 1920 x 1080 resolution (full HD) at 24 frames per second, compared to 1280 x 720 (30 fps). It uses Canon’s latest processor, the DIGIC 4. It also has several features that are absent in the older cameras, including a Super Slow Motion video mode, which can record video at up to 240 fps. With all these improvements I was eager to try out Canon’s new camera.

You can read the full review here: Digital Camera Review.com

How do you decide if this, or any of the many other digital cameras we evaluate here, is a good choice for you?  Certainly reviews  can help, but choosing the right camera always boils down to your own personal approach to photography.

While it may seem nice to have lots of features and all the bells and whistles that many digital cameras offer, they are only valuable if they help you do the kind of photography that you are most interested in doing.

To help you with this, you may find these Camera Buying Tips helpful.

You can also see a video review on the Videos page …

And let us know your own thoughts on this camera in the comments section, especially if you own or have used this camera.